Skip to content
Congratulations, you have made it to a blog about creative writing in which our main protagonist has finally written something about creative writing, rather than garbled bollocks about cider, social media, and the intricacies of one man’s relationship with the animals he is forced to live with on a daily basis. It may come as something of a surprise, but I have been procrastinating over creative writing this week, by indulging in creative writing, sort of.
Yes, as promised, way back in the first instalment of this blog (or maybe second, or third, I have no inclination whatsoever to check) I made mention of signing up to an online “begin creative writing” course. I then made some thoroughly witty jokes about a course on finishing creative writing perhaps being of more use to me, and oh how we all laughed. Anyhow, this week, the course began, and I attempted to go through the first week’s tasks without judging, and without releasing the ego-monster (I think I may have mentioned before that I believe myself cleverer and superior to everybody else in every conceivable way, and thus allowed to ridicule anything I don’t agree with, or consider beneath me, a habit I am trying to change).
A little background, I have spent my entire life telling people that creative writing courses are an exercise in making money out of the talentless, and that you are taught the basics of constructing sentences, paragraphs and general writingness at school. Combine this ability with looking at stuff and having ideas, and there you go, creative writing, for free, if you need telling, you’re in the wrong gig (and inventing words like “writingness” is as creative as it gets kids). It has always been up there with Klingon and Surfing Studies as a joke subject for a degree course in my mind. In the interests of fairness, and being able to back up my arguments, I signed up for one from futurelearn, as it is free, shortly after I read this article in the grauniad, because I agreed with what was said in it. One should never condemn something one hasn’t tried oneself, so I had to have a punt, and see if it does indeed help my efforts. Last time I indulged myself in a spot of “know your enemy” indulgence, I read the first four Harry Potter books in a couple of days so that I could ridicule them and tell everyone they were rubbish. I spent the next 2 years impatiently waiting for Order of the Phoenix to come out, and became utterly bewitched by them, still am a bit. But I don’t expect similar results here. We’ll see. (Did you see what I did with the bewitched joke there? Genius eh?)
So far, the course has told me one should keep a writers journal (I assume this is a more organised equivalent of all the bits of paper I have strewn about my pockets with ludicrous ideas scrawled on them in ever more illegible handwriting) and to notice stuff that happens around you (well duh). There was also a couple of bits of other people’s books to read, as examples of how writers can create characters (I have read books before thanks, and literary criticism is, I believe still a mandatory part of any school’s English lessons. Surely if you don’t read a lot, you probably shouldn’t take up writing). There were some bits where one was encouraged to write things, and put them in the comments thread for other people on the course to read. Here is an example of the exercises that are set, we were asked to write a paragraph with one fact, and three false things, and another paragraph with three facts, and one false thing, here is my effort, see what you think.
1 fact, 3 fiction
Rizla sat by the fire drying out, she had been soaked by the water cannons that they were firing from the top of the moors, she knew she shouldn’t have jumped from the window and taken herself for a walk, and was ashamed that Dave had had to drag her out of the ever increasing swamp that was being created before she went the same way as all those drowned sheep.
3 Facts 1 fiction
Dave read the paragraph he had written about his dog. He found it hard to believe that this exercise could make any difference at all in his ability to write creatively, the bit about the drowning sheep made him laugh though, as it was very funny. Rizla made him a cup of tea to celebrate.
I don’t think I’m taking this course very seriously. Nobody commented on my efforts (or anybody else’s really, that’s the joy of an online free course, your self-obsession and narcissism can be fully realised).
So my mind is not yet changed, I am still firmly of the opinion that if you need to be told to notice things, write down the things you have noticed, jiggle them about into an intriguing and interesting paragraph, and embellish the truth with more exciting fictional things, then perhaps creative writing is not going to be your thing.
I think this sarcastic bear says it as well as I ever could really. 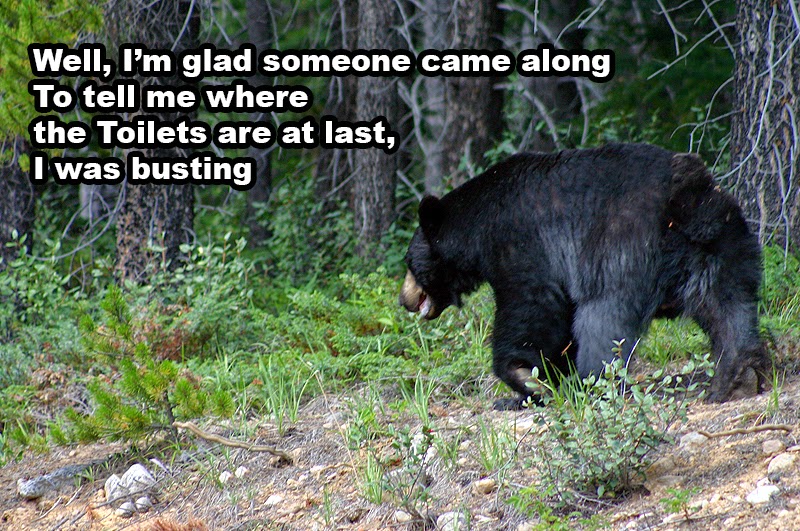 On the upside though, my collection of tatty notebooks that I have been scribbling ideas in for years and years has been retired. The course notes did inspire me to download an app for my phone instead, I am hoping that this will lead to me having less crap in my pockets (which could mean less pockets, and then PIRATE TROUSERS!) and easier access to all  my notes, as it syncs them to the cloud, and I can pull them down from any computer I like. Admittedly, they were always in my pocket, next to my pen before this, sometimes even in an actual notebook, and as mentioned earlier, more often on ripped off bits of envelope, old receipts, and beer mats, still easily accessible at any time, due to being in my pocket. I now have boxes full of them around my house (carefully filed, as one tends to call throwing things in a shoebox and chucking it in the loft). I am hoping they will confuse the bejesus out of future generations of historians (or my step-kids, when they clear out all my shit after I’ve died and left them all the crap I own as revenge for all the stuff they keep in my house now) as sadly my notes have a tendency towards the cryptic, and if not acted upon within a few months of scrawling them, there is a real danger that a) I won’t be able to read my handwriting anymore, and b) hedgehog- howitzer – pigeon war will not mean anything to me anymore (it doesn’t, you can have that one for free if you want it).
The other good thing that happened was while we had to listen to other successful writers tell us why they started writing, and other useful insights (feel the sarcasm in those last three words) and while this had no bearing on my work at all, and I struggled to understand why I should give a toss about them, Louis de Bernieres cheered me up. He said that he wrote depressing poetry as a teenager (check), then wasted his twenties trying to be a rock star (check), and didn’t write anything other than lyrics really until he was thirty-five, when he had a punt at novel writing (check and mate). So there’s definitely hope for me. Will keep you all posted on the course as it proceeds, not holding out much hope, as I have seen this week’s course contains an article entitled “How to be original” I don’t know where to start with that one, it’s mere existence makes me angry.