Skip to content
Back in the mid-80s when I was a kid, TV was a grey miserable place, filled with bad-cockernee-accented kids wearing big coats and taking heroin, drowning in swimming pools or dying of an aneurysm in the back of teacher’s cars. The psychedelic joy of the Magic Roundabout, Jamie and the Magic Torch and the Clangers were long gone. Yet inexplicably Blue fucking Peter survived to make you get up and do something less boring instead. Well, it was either that or American cartoons filled with rippling muscles, inexplicably sexualised cats and thinly veiled toy advertising. Welcome to Thatcher’s TV Times. Then, with almost no warning, the sunshine from down under started to peek through and before you knew it the playground was filled with the sound of ‘G’Day mate,’ ‘Bonzer,’ ‘you drongo,’ and people being ‘dobbed in.’ Australian TV had hit the UK.
First we were warmed up by the Young Doctors, then came Paul Hogan and Crocodile Dundee (which was on this weekend, I still really want his boots) then came the soap operas, millions of us rushed home from school so as not to miss our fix of Neighbours and Home and Away, (other than my wife, I have never loved another woman as much as I loved Stephanie Scully off of Neighbours – right up until she cheated on Toady with Rivers out of Heartbreak High) insomniacs became irrationally attached to the covert lesbianism of Prisoner Cell Block H. Eventuallythe Doctors were flying, but still pretty young. It all came to a head in the early 90s, with Round The Twist, when surely it couldn’t get any better, the pinnacle of inventive Aussie brilliance. Nay, the pinnacle of televisual entertainment itself. 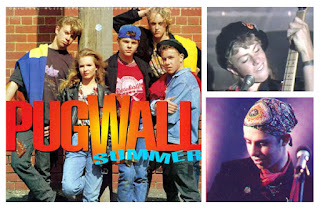 It could. The greatest television program ever made nearly slid by unnoticed in the summer holiday mornings – Pugwall. He had a dream, he was going to make it. So did I, and Peter Unwin George Wall made it come true for me.
Seriously, I was unhealthily obsessed with this show, I still am
A lot of people believe the Charlene and Scott wedding from Neighbours is the high point of late twentieth century Aussie culture, but they weren’t lying in front of the TV on a sunny summer morning just waiting to see if the Orange Organics got a gig, and if Pugwall could get to snog Jenny, so they were wrong. Don’t misunderstand me, the Neighbours wedding gave us Angry Anderson and the best power-ballad of the year – Suddenly, without which I would never have found out about Rose Tattoo, who are fucking awesome.
Yeah, I know, but he did this as well
There was a point when you could have been forgiven for thinking the UK was Australia, the charts were filled with Kylie, Jason, Craig McLaughlin, INXS, Midnight Oil, Crowded House, The Birthday Party, Cosmic Psychos (alright, maybe not the charts at this point) Peter fucking Andre even. And then it all went to shit, Jet, Delta Goodrem, Savage Garden? Anybody remember them? No, of course not. Those days are gone now, and the only big names from down under are hiding their roots as Canadian super-heroes and Norse gods.
What can have brought about the collapse though? Neighbours and Home and Away both relegated to Channel Five, where nobody is going to bother, Paul Hogan reduced to an obscure reference on Family Guy, and Prisoner but a distant memory of a badly produced mushroom scene. What do we get from modern Australia? A love of xenophobic immigration controls? The joy of casual racism? An indifferent response to claims of historic genocide? Some unhelpful stereotypes involving domestic abuse and dangerous blood alcohol levels. Pretty much, but then we already had them. Before my Australian friends get all up in arms about this, remember I am British, we are not merely nonchalant about historic genocide, most of us seem pretty fucking proud of it most of the time. Or remarkably blinkered about how you get an empire that the sun never sets on.
https://youtu.be/CoSU2SY9PjA
I am at a loss to explain how Aussie culture nose-dived as it did, from the giddy highs of Dame Edna Everage and Stefan Dennis’s pop career down to that girl you don’t recognise now who used to bein Neighboursbeing Harley Quinn in Suicide Squad (I google this shit so you don’t have to). Did it begin with Kylie (Minogue, the original one, not Jenner, whoever she is, and why is she above Minogue on google autocomplete?) losing the plot and deciding to sell bedding rather than be the queen of the disco? Or does it go further back to poor old Michael Hutchence (star of the greatest motion picture ever made – Dogs In Space) succumbing to a cheeky stranglewank in a hotel room?
There was a year or two in the 90s when I watched this film at least once a week
Maybe there was a brief moment in the late 80s and early 90s when Australia laid off the booze just long enough to capture the zeitgeist in a flash of exciting youth tv. Maybe this is how it is, Aussies were just the fidget spinners of their day? Is Australia even still there? Who can say? It might just be covfefe. But given that during my (very minimal) research for this piece I found a page of Australian Celebrities that described Rolf Harris as a beloved Australian personality, I can only assume they took their eye off the ball, and went down with Rolf. 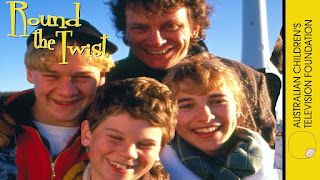 How the hell do you go from this to this and expect nobody to notice? 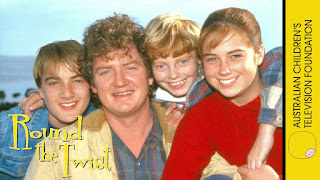 It could just be the death of all originality, as we get spin-off after spin-off of things we have seen before until they become as unrecognisable as the Twist family were by series three of Round the Twist. I wish I had the answers, but I don’t. Just a hope that some day soon, my clothes will be referred to as daggy again by someone with ludicrously sunbleached hair wearing lovebeads, a day-glo vest, board shorts, sunnies (sunglasses to you and me) and thongs (flip-flops). Or I could just listen to Courtney Barnett make Australia sound as cool as it once was.
N.B. In the interests of taste and decency this piece has blithely ignored the careers of both Mel Gibson and Russell Crowe, I think it’s for the best.