Skip to content
As I mentioned in my last blog (which I have been told was unhelpful and had a misleading title) I have an average at best voice which has been forced into the spotlight out of necessity. This was brought into very clear focus last night when the lead vocalist of one of my bands couldn’t make it and I was once again thrust into the singing spot. At least it gave me an excuse for the music stand full of lyrics I had (I’ve used one for the last twelve years of acoustic duo Rob and Dave, despite rarely adding new material, and make no excuses for never having cared enough to learn the words). Lyric learning tip, run through the words in your head (keep the words out of sight, just check you’re doing them right occasionally) while you’re doing something entirely mundane like walking to work or washing dishes and they stick easily. I haven’t bothered, but I used to care enough to.

I know, I used this photo last time as well, but I honestly can’t think of any better one to use
In light of last night’s near-disaster, I figured the best thing I could do is share what little I have learned over the years in hopes that it helps others who don’t want to sing but find they have to. As opposed to the self-indulgent snark of my last piece, sorry.
The first piece of advice I can give anybody is know your range and stick to it. If you can’t get to the note you are aiming for it will both sound rubbish (somewhere I have a recording of an eighteen year old me trying to hit the chorus of Self-Esteem by The Offspring which demonstrates this to great effect) and destroy your voice. I was reminded of this while screaming American Woman by the Guess Who last night and then having to croak the rest of the set: I really should have practised the songs earlier in the day. If your band are dicks and won’t change the key to a more comfortable one then drop the song, do something else. Then remind your fuckwit guitar player that people only listen to the singer anyway.
This leads nicely into the obvious one, practice. Practice a lot, and at full volume. I don’t. If I practice at all then I tend to do it mumblingly and about an octave lower than I’d do the song live (unless I am in the car, and then it is both loud, out of tune, and probably the best workout my voice ever gets these days). Hence all the trouble with The Guess Who. You can go for stuff outside of your range when you practice, since increasing that range is a good thing (though less likely to work the older you are, sorry) and nobody is there to hear you miss those notes.
Inhibition is your enemy. Have none, fear nothing and don’t worry about being embarrassed. I should have curled up in a ball and died a few times last night, since trying to play John Entwistle bass lines and sing at the same time is a very good way to not be able to do either. By manfully singing all the wrong notes and fluffing the bass lines (lot of root notes, really a lot) I got through it and, depressingly as always, nobody in the audience even noticed I had fucked it up. That’s how little they care, just go for it. It is both terribly sad, and incredibly useful that even when they’re paying attention they can’t tell when you get it wrong.
This link takes you to a video of me last night, missing the first note and hitting the wrong strings
Learn an instrument so you can accompany yourself. Singing along to records with a voice already there as reference is no good for getting your tuning ear going. Karaoke machines with flashing words don’t help you develop your sense of timing. Learn to read music, understand intervals, scales, keys and dynamics. Your voice is an instrument every bit as hard to master as any other. The more you use it, the better it gets. But you can’t get to the fiddly mechanical bits if you break it and you can’t buy a new one: if it hurts, stop and do it differently. (From the guy who tried to fix a completely knackered larynx with 3 pints of cider and a marlboro light last night – do as I say, not as I do. In my defence, it worked in time for War Pigs).
Take lessons, really. I know I don’t, and am always claiming to be self taught, and may have taken the piss out of you for having lessons, but that’s because of my selective memory. While it’s true I never had a lesson, a solid ten years or so of choir practice and GCSE music does give you an advantage. And is, in fact, comprised mainly of singing lessons that I have pretended not to have taken. This will also help to increase your range – in a much safer way than trying to scream as high as Ronnie James Dio. 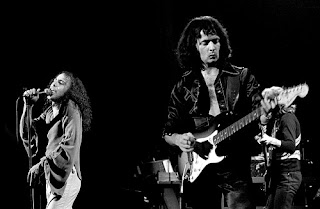 Up above the streets and houses, Rainbow flying high…
Finally, stand up. Really, don’t ever sing sitting down, and not just because it scares people into thinking there’s going to be a key change when you stand up. It constricts the diaphragm, stops you being able to access your lungs properly and makes you look like a dick. If your back is so fucked that you can’t support yourself anymore, get a stool so you’re still upright or find something to lean against.
Be aware that none of this is approved by any actual singing teachers. These are just things I have noticed over the course of my accidental singing career. If you follow them then you too can manage to achieve mediocrity. In case you think this is all just false modesty, check out the massively multitracked vocals on this track I recorded a year or so ago.

The Big Fluffy Deathbum EP by Dave Not The Cat