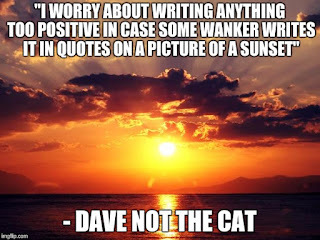 This year began with the unexpected death of my beloved dog, Rizla. David Bowie died the next day and cemented the theme for the rest of the year. Sitting drinking scrumpy alone in the rain on my thirty ninth birthday this week really brought the full awfulness of 2016 in general (not personally, I’m ok, things are good, don’t worry) home to me. Never in my life have I spent as much time crying over people I have never met (and in the most recent and dreadful instance, barely knew anything about, but I have never felt so sad and powerless as I did on Thursday night after hearing about the needless murder of Jo Cox. All day Friday – and I apologise for the slightly clichéd simile here – I felt like there was a grey mist about me that would never lift.) as I have done this year.
I have to confess, when I’m on holiday, I consciously avoid the news. I even avoid social media, since a quick facebook scroll is no longer uplifting and life-affirming, it is utterly dreadful and leaves me even more depressed. I realise this is supposedly childish, but children tend to be happy, unless given a reason not to be (I am aware just how ridiculous some of those reasons can be). And this week, if you want a reason not to be, then watch the news. I’m not going to go into all this week’s awful here, but I’d be surprised if you hadn’t noticed it.
Of course, very quickly after being a child, you become a teenager, and then you are presented with a million new reasons not to be happy, most of which revolve around what other people think of you, none of which actually matter. Unfortunately, you won’t realise this for another twenty years or so, and there will be a surprising amount of people who are still hung up on it when you get there.
At the moment, like everybody else, I am devoting much more time than I would like to trying to work out if I actually give a shit if we are part of the European Union or not (spoilers, I do care, but I am not telling anybody which side I am on, in case I have to argue about it, which is now officially the thing I am most bored of in the world). I was talking to someone the other day – who shall remain nameless, I am not interested in petty point scoring – who told me that people don’t understand the EU thing. I agreed, and then they explained to me that people thought we were voting to leave Europe, but we were only voting to leave the EU. As if we could hack away at a tectonic plate and float ourselves off on a wave of magma were it a different vote. This is just one reason among many that I have stopped arguing about the EU. This same person was also asking if I was as right wing as they felt, as I stood there with my Jesus-features, in my eco-friendly sandals, recycled brazilian tarpaulin hat and army surplus coat, ordering the vegetarian option and the locally produced organic cider.
But this is not about the EU. This is about getting older, and not giving a shit anymore. Which I don’t think I do, in or out, we are still all being fucked over by global corporations and having to be grateful that they pay us just a bit less than it takes to live on. But again, this is not about the EU, apologies for the brief tangent.
Those teenage hangups will always haunt us. Being laughed at for whatever reason sticks with you. I touched on it briefly in my lastblog about music snobbery, but that was only the tip of the iceberg. I love to dance, I think secretly everybody loves to dance, and that awful maxim ‘dance like no-one’s watching’ only goes so far. Somebody is always watching, even if it’s just you. And you are the meanest, snarkiest critic you will ever have. So no, don’t dance like no-one’s watching, dance like everyone is looking at you and you don’t give a shit. I have been recently, and it’s been brilliant. I worry about writing anything too positive in case some wanker writes it in quotes on a picture of a sunset, but I’m willing to take the risk this time.
For bank holiday weekend, me and Netty went to Brighton, and danced ourselves stupid at the Fortune of War on the seafront. They were playing Prince, Prince related songs, and possibly some other dirty funk that wasn’t Prince, but I think it was all Prince, right on the beach and righteously funky. It reminded me that back when I was at school, I loved Prince, I had seen the cover of Lovesexy and thought that Prince might be the coolest person I had ever seen. I saw him writhing all over the stage in Purple Rain, and was as jealous as a teenage boy can be of his trousers, his devil-may-care-telecaster-across-the-back-on-a-motorbike attitude and everything about him.
However, I was worried that I would be called gay. 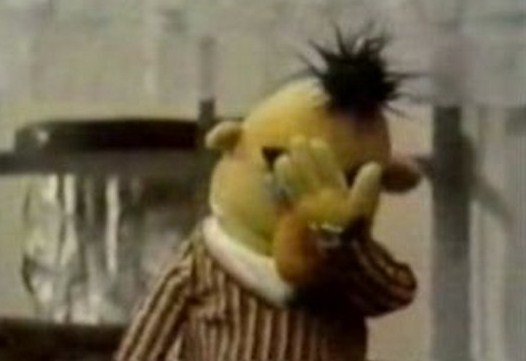 I know, but it was a different time, and I am also aware that I was most worried at the reactions from the school rugby team, who I played second row for – a role which requires you to fondle the testicles of the man in front while sticking your head between two bottoms. Yet I was worried that my love of Prince would make them think I was gay.
To clarify, I am not gay, I have checked, and I don’t fancy men. I don’t even fancy Prince (though I think I could be forgiven for that one if I did). In the same way as other, more stereotypical teenage boys saw James Bond movies and wanted to wear a tux, shoot guns and drive Aston Martins, I saw Prince and wanted to lie about naked looking this fuck-off-cool –
– or wear womens underwear and wank off a telecaster neck. 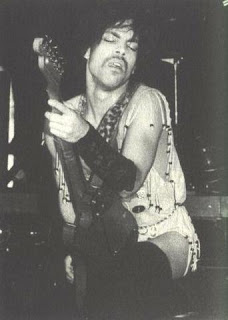 I know that this does not make me gay, and I also know now that I wouldn’t care, and it wouldn’t make any difference to me if it did, I am mistaken for a homosexual so often now I have stopped bothering to deny it.
I am not sure which makes me sadder now, the fact that I denied myself so much awesome music in case I was accused of being gay, or the fact that I thought being gay such a bad thing to be accused of. I’d like to think that in these more enlightened times, kids at school are out and proud, and when accused of being gay they answer in the same way as you would when asked where you live, what’s your name, what’s your sign etc. etc. I realise that we are not there yet, but surely it can’t be much longer now before we stop using Gay as a casual insult forever. Homophobia and Misogyny are so rife in our culture at the moment that it can even affect (albeit in a tiny, ultimately trivial way) that great bastion of Great Britain, a public school educated straight white male like myself. It is this ingrained fear of being gay that (possibly, if early reports are to be believed) were the actual root cause of the terrible and heartbreaking scenes in Orlando last week (YMMV IMHO and so on). 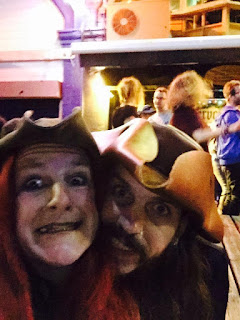 After the Fortune of War, we went on to Legends, a marvellous gay club on Brighton seafront. I went down to the cellar dancefloor, and got my funky thing on. A lovely man offered to ‘shiver me timbers’ for me (we were dressed full pirate, which turned out to be a good idea, as we were invited in to all the clubs along the seafront for nothing, ahead of the massive queues ahead of us, and with the prospect of free cocktails inside. Two middle-aged pirates dancing all the way along the beach, ahead of a long line of young, conventionally-beautiful people who had to pay. There’s a lesson for you if you like free drinks.) and instead of offering a horrified ‘I’m straight! I’m straight!’ – whatever that means – I merely smiled and told him I was married. Thankfully we now live in a country where I can tell anybody I like that I am married without revealing my sexuality. He probably figured out that I was married to the other Pirate who was right behind me, and a woman, but hey, baby steps, and I am a product of a society that made me afraid to admit I liked a popular black American singer because he was naked on the front of his record.
Anyway, Prince makes me think I can dance like this
Seriously, don’t start me on my Michael Jackson Fanboi hangups either

thanks to my friend Marcus for catching us dancing in the square to the marvellous Anthemplaying Bon Jovi last weekend. I accept that I (like most musicians who aren’t Prince) am a terrible dancer, but I am enjoying myself, and you can all fuck off. In my head I believe I look like Louis the 14th in Versailles (if you’re watching) when in fact, I look like the old grey grizzled buggers in it instead, and am rapidly approaching full-Gandalf. 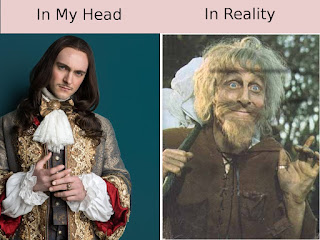 Nobody on their death bed regrets not spending enough time sat at the side of the dance floor making snarky comments about the people out there having a better time than they are, so get on up, get on the good foot, and do the bad thing while you still can. Stand up, say it loud, I’m a terrible dancer and I’m proud.