Skip to content
I’ve been off on my travels again, and that can only mean one thing. More of me being surprisingly mean about people who are a little bit different to me (yay! Xenophobia). Regular readers will already have enjoyed me trashing my beloved Westcountry peninsula and being mean about London in January. However, the OAPs and students of January have metamorphosed into middle-class family holidays by August, which means I have to do another London blog. 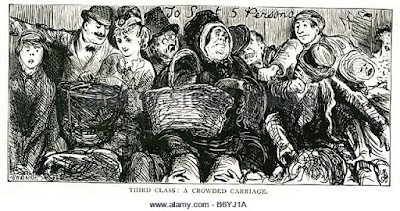 It all began with the moral maze of 21st century train etiquette. Back when I was a kid, this stuff was easy, you got up and offered your seat to a lady or an elderly person if the train was full (and dear god are they full these days – I don’t care if Jeremy Corbyn faked it or not that was a point that needed making). But nowadays there is the question of everyday sexism: assuming a lady needs my seat more than me when I am now a haggard old git could lose me twenty guardian reader points. This is compounded by just how grey you have to be to constitute being elderly now? If some cheeky youngster offered me their seat just because my beard is all grey now I would be highly offended (though I would still take the seat, I’m not stupid). What if I offer my seat to an ‘elderly’ person who is both younger and fitter than me? Will they be offended? I will admit I compromised, I budged my wife in a bit – some of you may be old enough to remember having to ‘budge in’ on the school bus – and we went three up on the seat with a 5 year old: who was watching netflix on his iPad despite his mother’s insistence that it wouldn’t work. 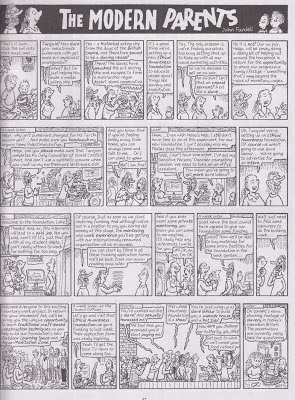 The problem now is that poor little
Tarquin and Guinevere have children of their own
I love modern parents – I have found no better font of comedy fun than the middle class guilt inflicted on the poor little darlings of overworked professionals. You are not bad people, you are doing nothing wrong, and I understand that you want the small amount of time you manage to spend with them while you work all the hours the gods send just to put food on the table to be fun, but you cannot expect me to keep a straight face when I overhear you say ‘finish your brioche and then you can have an avocado smoothie darling’ (genuine quote from a train journey there). You really can’t. Again, I accept that what you are doing is much better than the bag of haribo and bottle of coke that would not have had me blinking an eyeball, but I will defend my right to be an antiquated old dinosaur and laugh at you. The I-have-reproduced-and-am-therefore-better-than-you entitlement of all new parents is always a problem though. Whereas when I was a kid, had an old chap on the train told me to ‘fuck off and stop kicking the back of my chair’ my parents would have agreed whole-heartedly and clipped me round the ear for it, now though, I am worried that I will get shouted at and clipped round the ear for suggesting that these pampered little creatures could possibly be doing anything wrong. Particularly when even I can tell that the kid didn’t really mean to kick me in the ankle – three times, the little wanker. This could just be me being paranoid though, I haven’t been brave enough to test the theory.
London itself, once we arrived and started gobbling up its lovely culture, continued to pique my interest in my generation’s irritating pride in their distinctly average offspring. The BP portrait award exhibition in the National Portrait Gallery seemed full to bursting with ‘the portrait is of the artist’s son/daughter’ more than I have noticed before, though perhaps just because it was on my mind. Certain amusing parenting traits emerged in all the galleries though, from the 4-year-old art critic explaining the metaphors behind the pictures to her beaming (and clearly fucking mental) mother, to the baby (who almost certainly couldn’t focus its eyes yet) being dangled for the longest time imaginable from its crocheted papoose in front of a Georgia O’Keeffe while its mother stared at its face attempting to translate the expressions therein. (Sorry for calling the baby an it, I didn’t ask its gender, so I am using gender neutral pronouns, rather than being mean.)
My most terrifying parenting encounter of the trip was with a small boy who had obviously been told to wait in the toilets on the very top floor of the new bit of the Tate Modern. There was only me and him in there, he alternated between sitting on the floor behind me singing to himself like an 80s horror movie (sounded a lot like one, two, Freddie’s coming for you), and rattling the handle on the door of the shitter his Dad was clearly trying to avail himself of. I must admit I had the worst case of performance anxiety I have ever had, and took the first opportunity that came my way to give a fake shake, wash my hands and get the hell out of there (it was only an attempted lucky wee anyway, at my age you can’t afford to walk past a toilet before attempting 14 flights of stairs – I made it down unsoiled, you’ll be pleased to hear). 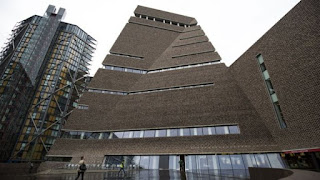 After paying extortionate prices for an exclusive flat in the sky
those bastards at the Tate open up a viewing gallery that
lets anyone who wants to gawp in your windows
A Premier Inn breakfast is always a fine thing, and in the school holidays it is a showcase for the two extremes of modern parenting. On one side of us the table was set for ten – despite only technically seating a family of three. They were joined by a pony, an aristocratic looking bear, a flopsy bunny, a large frog, a doggy, a well-loved sheep and what was clearly the favourite: another bear, who had lost most of his fur and looked a bit chewed. The family were all happily including these interlopers in their breakfast conversation (which was about upgrading the pony to a real one). While on the other side, five tiny berserkers crashed into all and sundry while their completely-fucking-knackered-looking parents stared disinterestedly into their phone screens – it was the end of August, five weeks of ‘fun’ will take its toll on anyone, I did not judge. Of course, the over-enthusiastic and engaged parents with all the bears could have been grandparents (it would make sense, they get to give them back again after all), it’s becoming increasingly difficult to tell which is which, and ‘Parents or Grandparents?’ is fast replacing ‘Dad or Boyfriend?’ as my favourite people-watching game (‘Fat or Pregnant?’ barely gets a look in these days).
The phone screens are starting to worry me now as well, and the ear phones. Every tiny bit of London is now full of people talking to themselves with a white cable hanging from their ears. I’ve always used my dog as an excuse to talk to myself in public, but am thinking I might just start wearing earphones instead. With the advent of Apple’s new ‘ez-lose’ wireless earphones, I might not even need the cable, I can just cover my ears with my hair and hope nobody looks too hard. It is, however, surprisingly intimidating to see somebody doing the latest please-notice-that-I-have-clearly-just-been-to-the-gym walk (chest pushed out like a hooker outside a nightclub, arms held surprisingly high, still in a deliberately-one-size-too-small suit in a 30 degree London heatwave, could be sweat in his hair, may just be straight out of the shower) while shouting at nobody as he barges through all and sundry. 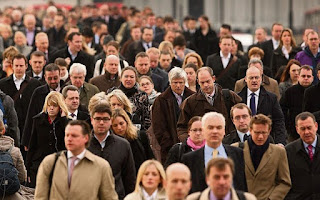 I can’t tell any of you apart – sorry

That guy kept walking into the delightful pub attached to Paddington station as I waited for my train back to the land of the sane. Sometimes he was old and grey, and hugging a battered old briefcase, sometimes he was fresh from city-fuckwit school, all eager and manbagged. Sometimes he was in disguise, wearing a checked shirt and jeans but they’re all the same guy to me. In the same way as so many people think all long haired beardy-weirdies in big hats look the same, I can’t tell one spiffy short-haired commuting professional from another. A pigeon keeps flying into the pub and trying to nick chips, I can’t tell if he’s the same one, or a succession of different chancer pigeons either. London seems to homogenise you into a phone-staring, bullshit-shouting, work-hard, play-hard (die-really-young-and-stressed-out-but-with-a-catchy-slogan-for-it) largely unhappy suicide risk. Probably.