Skip to content
Q: When can a new, exciting, dangerous art movement be said to have truly lost its edge?
A: When a group of middle-aged, middle class people holding umbrellas are dragging their children around Bristol on a guided walk of it by a wildly enthusiastic, fiftyish (sorry if you are reading this and younger than that, I assume a lifetime of the lifestyle has taken its toll) chap in a sensible lightweight waterproof jacket. 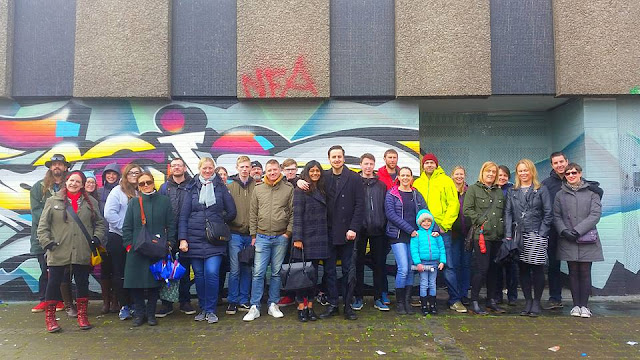 That’s me on the far left, don’t let my feigned cynicism put you off, it’s a really interesting walk
This was my realisation last weekend as my wife and I trudged the pavements of Stokes Croft on a tour of Bristol street art. Street Art, Graffiti, or whatever you want to refer to it as, has been defanged; it is now as dangerous as the pre-raphaelites, pointillism, cubism and pop-art. We were on the walk to see if it would be appropriate for my wife’s private school GCSE class to go on, that’s how edgy the spray can brigade are now (they have their own specialist paint marketed at them by big corporations and everything). I think a few of the other participants were a little miffed that we only saw two Banksys, and that the very enthused guide was far more excited by newer work, and Graffiti’s inherently transient nature. I liked him, I learned stuff, although I agreed with the guy who had sprayed ‘Fuck Banksy’ on the side of a wheelie bin in silver paint. Banksy is to Graffiti what Mumford and Sons are to folk music (I accept that that might be a bit strong, nobody deserves to be compared to Mumford and Sons plc). 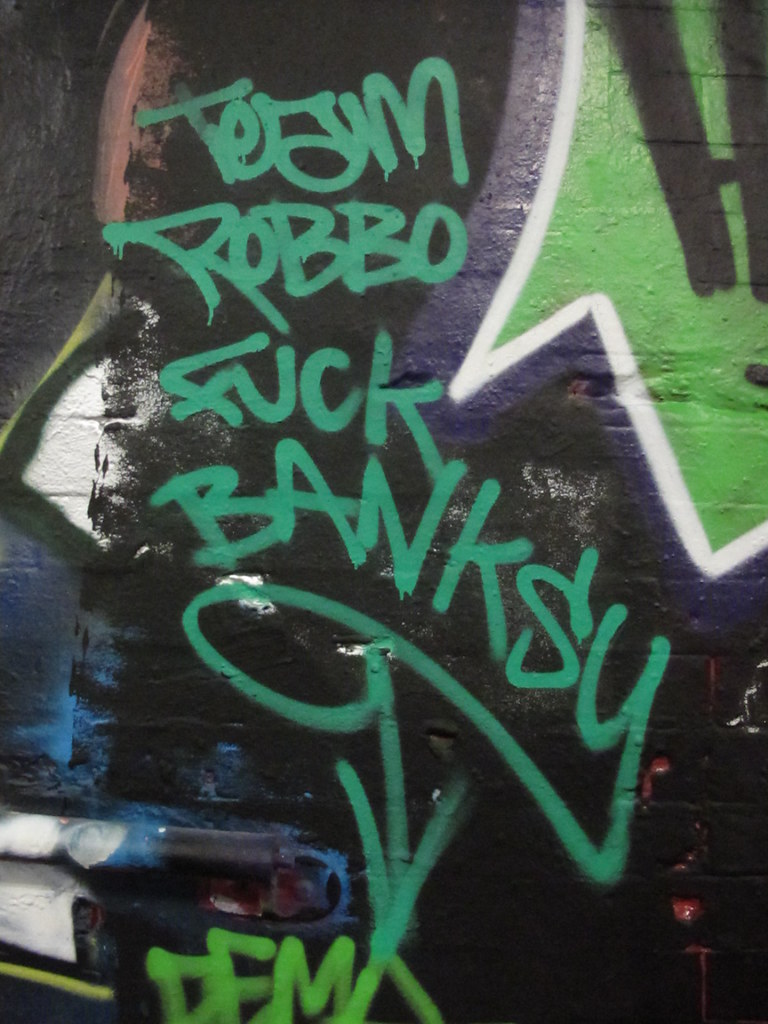 This is not in silver paint, or on the side of a wheelie bin. I didn’t take any photos.
Art, by its very nature, is an ever changing, ever evolving thing, and so it is only natural that big, colourful, barely readable letters on the side of trains would become accepted and boring. Of course, Graff/Rave culture is all well over thirty years old now, and by rights should be as dead as the hep cats and Daddios of the beat generation were when it sprang up. But it’s not, perplexingly. Millenials (I think that’s what we’ve decided to call them yeah?) appear to just be running a continuation of the culture that we generation Xers handed down to them. Spray your name on a wall, eat a disco biscuit and chew your face off to some seriously dirty beats, just like 1989(except they spell it dutty now). 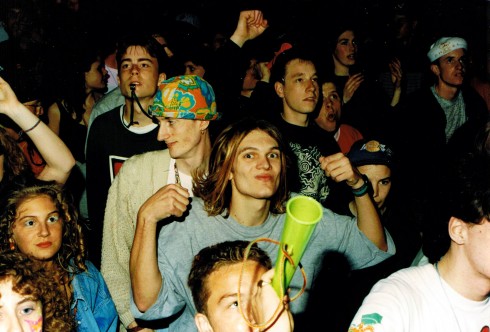 Not so very different, apart from the hair, obviously

A young chap in Bristol city centre on Saturday was singing DJ Luck and MC Neat’s 1999 garage classic ‘With a Little Bit of Luck’ to me as he handed out flyers to a dance weekender. It is possible that he recognised it as something an old git like me might recognise, but it is still akin to me handing out flyers to a free party in 1992 (when we were still allowed to meet up in fields and dance to repetitive beats) while singing ‘I Wanna Dance Wit’ Choo’ by Disco Tex and the Sex-O-Lettes. Which, I must confess, I may well have actually done, but I am special.
It worries me though, my Grandparent’s generation had Jazz, modernism, berets, trench-coats and sneaky reefers. They went on to ask their kids what that god awful noise was and why on earth those blokes had such long hair. My parent’s generation got Rock and Roll (which in my very broad definition includes Psychedelia, Heavy Metal and Punk) Pop art, loon pants, winklepickers and LSD. They wanted to know why the music we listened to had no discernible tune, and invented the rap-with-a-silent-C joke for everyone to enjoy. My generation got huge, phat (with an emphatic PH) electronic bleeps and beats, Hip-hop, Graffiti, massive trainers, flowerpot hats and Ecstasy. We are still young enough to believe we like current music (luckily for us it is not radically different yet). 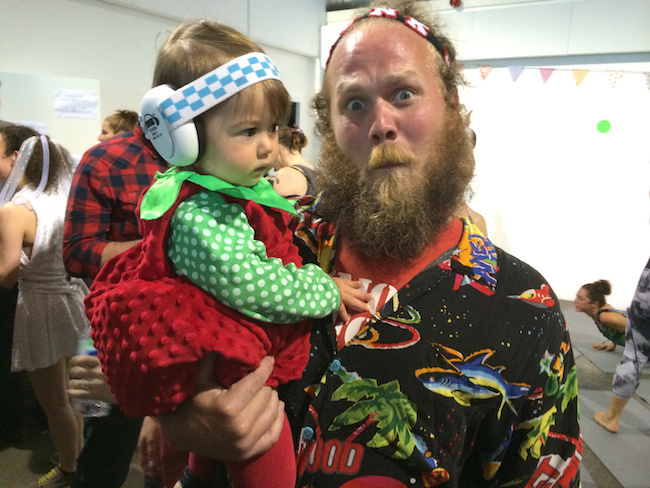 This is not my mate Tom, looks a bit like him though
The next generation seem to be content to drink over-priced coffee and grow over-long beards while listening to the same tired old trance anthems and munching on the same horse tranquilisers that the hippies were messing around with in the 70s. In their defence, we are doing the same thing, generation X is nothing if not greedy, we hung on to the coat tails of rock and roll, we can latch on to the hipsters flannel shirts if we want to. Of course, the big difference is how well it is all classified into sub-genres nowadays, it can’t even be narrowed down to one type of glitch hop for fuck’s sake (it’s possible that critics just need to do something to justify their existence, so why not new genre names. I’m still a big fan of Post-Womble-Deathcore-Hoedown).

It might be because they have the new frontier that we never did, the world wide web, interconnectedness with everyone all the time, a platform to broadcast your every thought and whim upon, and consume all the culture that ever was. There’s a lot of itout there already, maybe now it’s all so accessible there’s no need to invent anymore. Or possibly the nextmass change has already happened and I am just too old to realise that it is not just vandalism/noise. Broadly speaking I can drop modern, popular musical movements into 3 stages (I’m a musician, my wife’s the artist, if I keep up the art talk I’m going to get found out as a bluffer pretty quickly) the Jazz age, the Rock age and the Electronic age. The first half of the 20thcentury was dominated by big bands, crooners and swinging good times, and then Elvis, Scotty Moore and Bill Black turn up and turn everything upside down (Rock Around The Clock is Big band Swing, I don’t care what anybody else says, it is NOT Rock and Roll). After that it’s all guitars and rock (be it ‘n’ roll, -abilly, prog or punk) until Giorgio Moroder buries everything in synths, Run DMC sample all the beats and old men with guitars and trumpets harrumph and say it isn’t music and anyone can do it (it is and they really can’t). Of course there is a seam of pop music running through the whole thing from Irving Berlin to Justin Bieber whose only concern is creating earworms to get your foot-tapping and your granny humming along.

Small confession, I think Love Yourself is a fucking top tune, and I am not sorry
Of course people get upset that their idols get old and continue to play, shaking their heads at grey-haired, arthritic rock and rollers still strutting about the stage, not remembering that the old swingers, jazzers and bluesmen played and sang until they dropped (some of them have not dropped yet, nobody is telling Tony Bennett he should stop now). I remember Phil Cooldoing a routine about the Stones still playing in the 80s – I can’t get no… Sanatogen – he thought they should have stopped then…
These people are more upset at the very visible evidence that they are no longer young, virile or relevant, rock is dead, get over it. I’m sure sometime back in the late 16th century some ludicrously hatted Italian noble lamented the fact that Giovanni the Madrigal guy was still trying to to fit into his minstrel’s tights at his age. 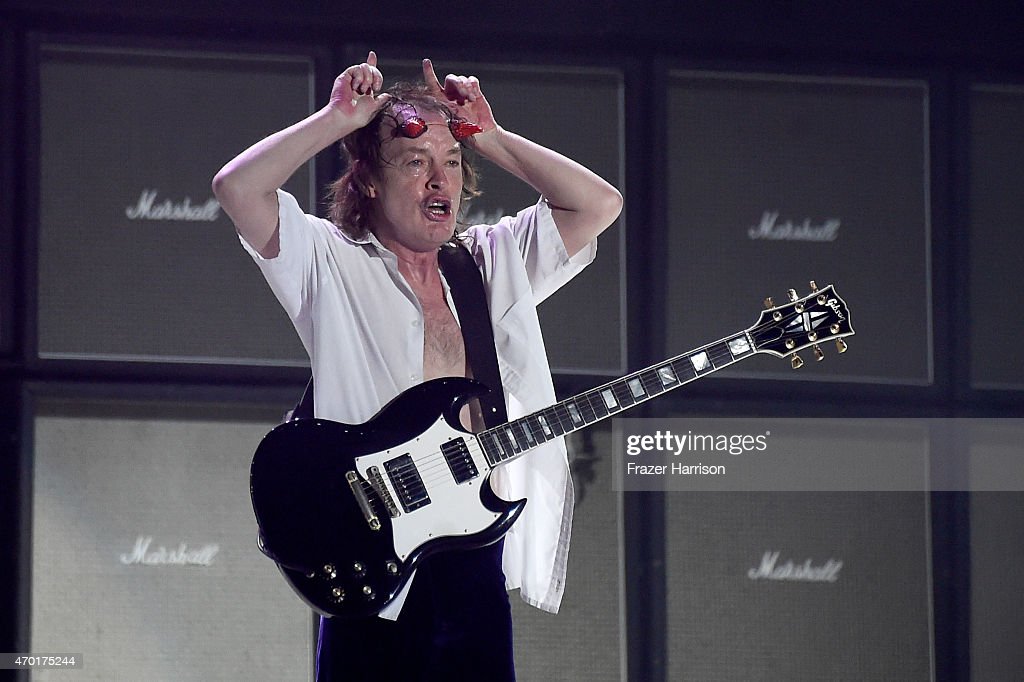 I was told these guys were past it when I saw them 25 years ago
After the walk, my wife and I laughed at the idea of the old people’s homes of the future having an afternoon rave rather than a tea dance, or a sing song. But Ebeneezer Goode is the new Knees Up Mother Brown, make way for the next thing. The original rockers probably never expected to be grey haired and supervised either, but eventually the day room will be filled with black lights and glow sticks and the disco biscuits will be rich teas (predunked so as not to hurt your teeth).

Anybody got any Veras? Lovely