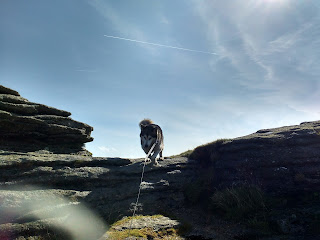 Aside from the first six years which, in my failing memory, have become a gritty urban life on the wrong side of the A3 in Guildford, where a toddler can fall into a snowdrift on a footbridge and not be discovered for weeks, during which time he learns to fend for himself, ultimately running a gang of sentient snowmen on the mean streets of Stoughton (my parents assure me I was not in there for more than thirty seconds and I should stop moaning about it and telling massive great lies) I have lived most of my life in beautiful Devon, and have lived with a dog for more of it than I haven’t (I would say I’ve owned dogs, but that would imply that I have some kind of control over the stubborn furry wankers). This is why it is surprising that for most of my life, I have shown little to no interest in the bits of Devon that aren’t pubs.


In my defence, my first dog, Rambo, was more than happy to just walk round the corner to the Portobello, where the barmaids would feed him kit-kats and Guinness. He was very much a town dog, since we lived in Bideford at the time, and his favourite walks were on weekend mornings – hoovering up leftover takeaways from the pavements – he only needed a lead for the look of the thing and very rarely moved more than a couple of feet from my ankle. By the time we moved out here to the countryside his arthritis was so bad that it was all he could do to get to the pub for a saucer of Guinness and a bag of pork scratchings without me having to carry him most of the way back. 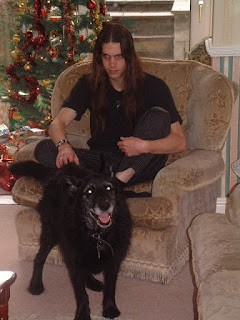 Rambo and I, when we were young and pretty
Rizla, my second dog, was fond of big walks up on the moors, but since she was so easy to walk on the not-Dartmoor-moors near home – since she was terrified of sheep and cows, and could run around off lead wherever we went – I didn’t often get out to the real Dartmoor-moors with her. My cat, Kahlo(sometimes referred to as Bitey) also got sulky if she didn’t come out for walks with us, and we couldn’t take her in the car, so nearby was where we went. Rizla was also far too easily tempted by the lure of pork scratchings in the pub, and was friendly enough that that was what we did. 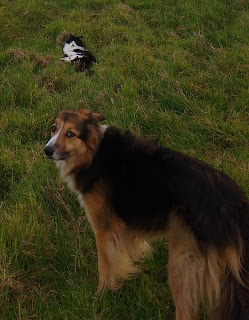 Rizla was every bit as upset about the cat muscling in on her walks as she looks here
There used to be two cat-dogs running about with her until Heisenberg died
But since I got Sky a year ago, it’s all been a bit different. She’s an Alaskan Malamute, which, if you’ve never owned one, is a bit like having a pet cow. She is enormous, stubborn, needs rubbing down, brushing and drying as soon as you get in from a walk if you don’t want her to get a million different weird skin infections (so maybe it’s more like having a horse than a cow?) and seems a lot less murdery than she really is (not cow-like at all, poor choice of simile, I apologise – wolf seemed too obvious). My step-daughter doesn’t believe me that Sky is quite so murdery, but then she hasn’t witnessed it firsthand since she doesn’t live with us anymore. She just sees the big cute fluffy doggy and can’t believe it is actually mostly wolf, with all the prey instincts that that entails. Her view of the animal kingdom has been warped by a weakness for Disney films, and she tends to anthropomorphise dogs. Also she has never seen Sky throwing a rabbit around the garden prior to ripping it to pieces, or dragging a mole from its hole, or ripping the tail feather off a pheasant. I have, and I am getting a lot better at stopping her now.
My wife now works nearly every Saturday morning, so I resolved, about a year ago, to go up a different tor every weekend and get a selfie with the big dog. Thus getting out and about on the moors, and getting valuable instagram likes at the same time. Sadly, as with everything, there have been mitigating circumstances: Devon weather (such as the weekend we went up there last year and I couldn’t see Sky if she went to the end of her lead – I have never been so glad of having a navigation app on my phone); laziness – it is all too easy to just hop out of the door and have a quick run over the not-Dartmoor-moors by the house – especially since there’s usually a bit where Sky can get off the lead for a bit there: I’m relatively confident that she can’t take out a cow; Sky’s current reluctance to just get in the fucking picture – which is leading to me getting covered in crap trying to hold on to a wolf that has just rolled in everything awful while waving a phone in its face; and hangovers – which joyfully continue to affect most aspects of my weekends. 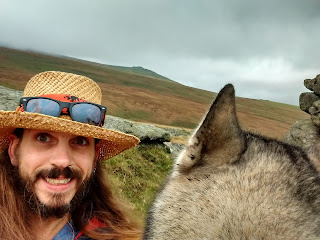 Sky refused to even turn around, I am making all the effort in this relationship
Despite Dartmoor’s reputation as a huge, bleak, lonely place – which I can see from my garden: Yes Tor, looming like Mount Doom in the distance – it is in fact almost impossible to find a weekend when the moors are not covered in school kids doing Ten Tors training. It’s not just the kids with massive rucksacks though, it’s as crowded as Oxford Street out there on a nice day, hikers of all ages with all the gear, crushing themselves into awkward positions on the ground trying to get the perfect angle for their selfie – ensuring they get the sheep, the pile of rocks, their artfully made sandwich, travel coffee mug and all their expensive hiking gear in shot to maximise those all-important instragram likes.
I can be as withering about them as I like, bouncing around the moors in my cheap wellies and battered straw hat, but I am no better. Since I started writing books, and thus having to have a marketable online presence (apparently) I too now have to rack up those all-important instagram likes. Which means getting those selfies perfect, this is where the photogenic doggy becomes indispensable. Just this morning I was lying in a muddy pit atop East Mill Tor, holding on to the sheep-poo-covered neck of my filthy Malamute and begging her to stay in shot so that we could get that perfect picture. 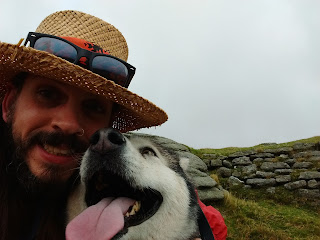 This was a lot more painful than it looks
Neither of us are actually happy
Instagram is a lie
A couple of weeks ago I was in a similar position on top of High Willhays when my hat blew away in the relentless Devon wind. I let it go just to get the picture (then gave chase, and got it in the end) which makes me question my judgement. I never took photos before this. I still forget to most of the time, I find memories better than photos, since they can be fuzzier, blurrier and paint a more flattering picture of you when you look back on them later. 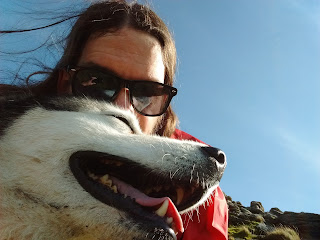 This picture serves no purpose and I very nearly lost a perfectly good hat to get it
Sad to say, I do spend a lot of my walks with Sky wishing I had done them with Rizla – who as I have said, was very well behaved off a lead. She would run off, but come back as soon as I whistled the Superman theme to her (much of this may have been tempered by nostalgia, she rolled in fox shit as much as any other collie). Whereas this is Sky’s idea of recall.


Never let it be said that dogs don’t have a sense of humour
Added to which, the most aggressive thing Rizla ever did to another animal was lick a kitten’s head slightly too aggressively (by which I mean she put Bitey’sentire head in her mouth when she tried to steal her dinner) whereas Sky will try and eat anything that looks edible, especially if it’s moving, so she is not ever allowed off her lead. This makes short cuts across moorland rather more treacherous than expected, since those ever so handy not-quite-paths are easy enough to pick your way across on your own, but when you are being dragged by a 30 kilo wolf trying to get at a sheep that looked at her funny, they are a little more tricky, and I spend an inordinate amount of time digging my boots into the mud, trying and failing to haul her back in and praying I don’t smash my head in on the rocks as I slide ever further downwards on my heels. I fell over once (I say once, it happens a lot these days), she just got to the end of her lead and looked back at me with a shrug, didn’t even come back to check I wasn’t dead.
This is quite problematic for a writer, since we spend a lot of time while walking desperately trying to scrawl down notes for the amazing idea we just had. This is simple when your dog happily jumps about not trying to kill everything in sight, and lets you get on with it. Not so much when she is attached to one of your arms by a rope and doesn’t want to stop – ever. This is why I have started falling over more often, and have no record of my amazing ideas. It also leads to long cuts through bogs and marshes as we have to leave the nice, flat, easy-to-walk-on-with-a-big-dog-on-a-lead path because some other, smaller, better-behaved dogs have turned up.
Ultimately, I am very lucky to live where I live, and be able to go walking on Dartmoor within ten minutes of leaving my house. Admittedly, the nearest bit we can get to is also an army firing range, so it does present a few unique dangers in that respect, but what’s life without a little danger. I am also very lucky to share my life with a very beautiful (also time-consuming, annoying, badly behaved and stubborn) animal, that listens to all my crap, inspires me to write, gets me out of the house, melts my heart every time she looks at me and will continue to earn me those all-important instagram likes (along with those few accounts that automatically retweet anything hashtagged as #Dartmoor and #Devon). Long live our never ending Tor Tour.

P.S. Do please follow me on Instagram if the hints dotted throughout this piece were too subtle for you to pick up on.