Skip to content
My summer hat this year has been getting an undue amount of attention. I got it from a charity shop in Exeter for two quid with the intention of tricorning it. I’ve always wanted a straw tricorn, and never yet found a straw hat with a wide enough brim. I did not tricorn it in the end, I liked it as it was – apart from the USA stars and stripes band it had round it. That was swiftly dealt with by Rob and Rupert when they drunkenly ripped it off in the pub and commandeered it as a Bruce Springsteen headband. For the sake of its integrity I tied the only scarf I own that is long enough around it to keep it on my head. It’s an orangey Jimi Hendrix print that was on the wall in my old flat. It has the obligatory magpie feather (provided to me by my youngest cat, Richard Parker – still attached to its previous owner) in it, and is otherwise a fairly unremarkable straw hat. 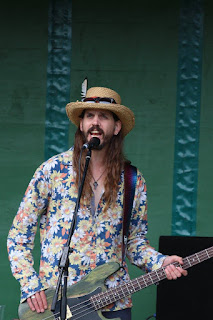 This is the Hat in Question – Nice, though unremarkable
My dad immediately called it a Morris dancing hat. He may have had a point. The man at the Eden project who insisted on photographing me in it was a little more odd. I’m used to being photographed when I’m in full pirate, but when I’m not even dressed up it seems a little more disturbing. As is the trend of impossibly young women telling me they like my shirts – Netty is okay with it, as long as it is one of the shirts she has bought me. It happened again at breakfast in Weymouth, on our recent jaunt across the country when the waitress expressed her deep love for my pink checked shirt. Maybe the Weymouth Seafront (technically correct, but you do have to stand up and look over a wall – and round some houses – to see the sea from the beer garden) Premier Inn doesn’t get a lot of colour in it?
The hat continued to get noticed (as did the pink shirt) as we headed into Dorset. Personally I feel it something of a risk to put the Tank Museum so close to Monkey World, but then I’ve recently watched War for the Planet of the Apes. The Tank Museum itself brought conflicting emotions, on the one hand, the display of anthropomorphised horses who were glad to do their patriotic duty by getting mown down by machine guns and tanks in the first world war made my adult, pacifist, animal righty self incredibly angry. On the other, there were massive tanks and the kid who watched every war film ever made, read commando comics, and played army in the woods with his brother whenever possible who still lives inside me was wildly excited. I would have been running around as much as the two kids who ignored the tired reprimands of their parent only to run into a big old ex-military type that scared them into stopping with the quietest of rebukes, but my new flip-flops were rubbing, and you can’t run in flip-flops.
The best monkeys at monkey world were, as ever, the hairless apes that stare at the world through their phone screen. As I overheard one excitedly noticing a facebook app update notification, I shared a look with an Orang-Utan who had fashioned his blanket into a hat against the never-ending British rain. I think we were both thinking the same thing – although I was suddenly suffering from hat envy. 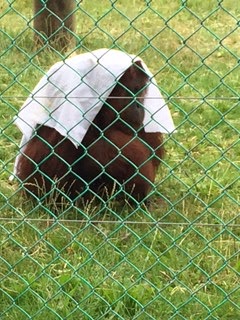 I’ve met a lot of apes, this guy is my favourite
If you do go to monkey world, read their stories,
it is simultaneously the best and the worst of human treatment of animals
From Dorset to Brighton. City of flamboyance, excess and joy. Surely my unremarkable hat could fade into the background here? Nope. While trying to get a table at a very nice fully booked restaurant for the second night in a row, the waiter recognised my hat, and squeezed us in. Sometimes it pays to dress like an idiot. As we sat and watched the sad, soggy hen nights trek past in the rain I heard the unmistakeable sound of a Frenchman lighting a Gitane. I had not planned to have a cigarette at this point, I was trying to be good and have a day off, but suddenly I wanted to look cool in front of the French people, so I had one. It was nice. I did not feel guilty, I think subconsciously I needed one having just paid twelve quid for two pints of Cider.
From Brighton we headed east, to Canterbury, city of Thomas, a bucket (really niche, really in joke, sorry). There’s not much of comic value to report, I caught up with my cousin who I been unable to talk to all day at her wedding last year. It was sunny, it was great, I got to properly talk to her new husband finally. He’s lovely, the pub by their new house is lovely, their new house will be lovely when it’s not a building site anymore. There are no jokes in this paragraph, sorry. 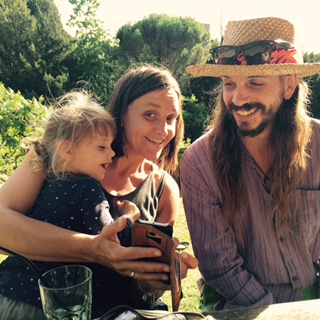 My lovely cousin and I, and one of her crazy daughters
I did find myself in a Lebanese/Italian restaurant in the evening, which is an odd thing. But it meant I could have lovely spicy lamb, and Netty could have rather less exciting pasta, so we were both happy, though she did point out that what I was eating was basically a posh kebab and chips. I failed to see what the problem was. A couple on the next table tried to make conversation with me. I didn’t even have the hat on. I think they need to stay in more. I am naturally suspicious of the outgoing and friendly and in my head all I can think is ‘Fuck you restaurant conversation starters, we are not swingers, go about your business and leave us alone.’ I realise this is probably more my problem than theirs.
Then we did London. 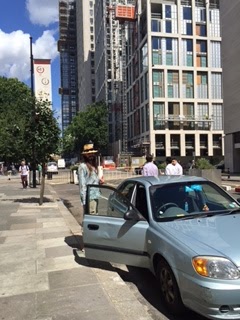 Seriously, I drove this legendary piece of shit car right up to County Hall
It even went into valet parking
As always, we did the art galleries. Watching the security guards doing their bag searches I discovered that in order to get your bomb in, you should put it in the nappy bag under your pushchair – they do look in them (brave men) but they don’t get their heads in as close. As I walked there I realised that nowadays, in any big city, I flinch every time a white van driver starts to drive like a cunt. This is particularly inconvenient since in this country – and probably most others – all white van drivers drive like cunts. It doesn’t mean they are terrorists – just wankers. On a more positive note, I like art galleries, they are an excuse to look at boobies without feeling at all guilty. 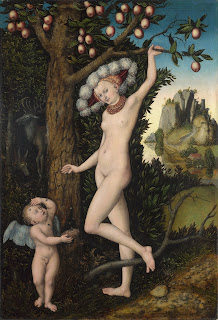 You can stare at this as long as you like, and nobody calls you a dirty old man
I walked past some amazingly beautiful art drawn in chalk on the pavements for a few pennies chucked into an empty coffee cup to go and see some eyewateringly expensive athena prints – also known as the Royal Academy’s Summer Exhibition. Yay capitalism. This is an over-simplification. Some of the stuff in the show was innovative, brilliant and exciting. All of it was for sale. The things that were selling in the highest numbers were really dull. Monochrome prints of a blurred figure through a window, a photograph of ripples in water. For thousands and thousands of pounds each. A print, not the original, a print. So that some couple with considerably more money than you can put it in the downstairs toilet and tell all their friends they got it from the Royal Academy. 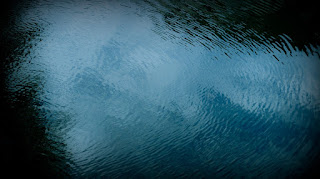 This was not in the show, but the one with the most orange dots to indicate a sale was not that dissimilar
I like art, and art is not the problem. But I could have bankrupted myself over the week I was away throwing change into cups for the homeless. It isn’t the change they need though (right on, Dave, right on). I did chuck a lot their way regardless, but in a country where it is apparently acceptable to spend five figure sums on a fucking poster for the hallway we really shouldn’t have people sleeping on the streets.
On a lighter note (phew) in the Tate Modern, a small girl pointed at me and said ‘Mummy what’s that man dressed as?’ (probably because of my hat again) causing my wife to crease up and thus fail to hear the answer. I was busy being saddened by noticing the only faces not lit by the glow of their phone screens outside the actual galleries were asleep. Those faces being overwhelmingly white and middle class, unless they had a tell-tale lanyard that meant you could buy coffee from them, watch them mop the floor, ask them for directions or be told off for taking photos where you shouldn’t by them. Netty takes photos of all the pictures – because she is an art teacher. I am convinced she has thousands of images of the same paintings on her hard drive, and can’t fathom why. I then realised this is probably how she felt at the time I owned five near identical fender stratocasters. Vive la difference. 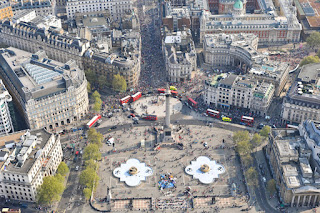 Sitting in Trafalgar Square and nearing the end of our jaunt,
I suddenly realised with extreme clarity that it is a massive cock and balls.
It was hard to explain my laughter
And then we were done, I drove off through Knightsbridge towards Heathrow, and a little stop off there, followed by a sojourn in Godalming (heralded by a near crash as the A3 took me right past the bottom of the road I used to live in in Guildford and I got over-excited) with some very dear friends ended in a drizzly drive back to Devon – the car is still creaking.
I’m nearly done with cities if I’m honest. Not quite, but nearly. The thing that most took my breath away, and made me happiest was the view of Dartmoor from my garden. After such a busy holiday, I said to Netty, ‘maybe next year we rent a nice cottage, somewhere rural, take the dog and relax.’ She pointed out to me that we could save an awful lot of money that way, since we already live there. 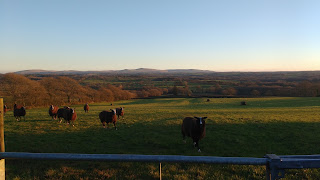 Seriously, this is the view from where I live,
why do I go to other places?